Koozic recently blew its second candle, while the development is still ongoing. As usual, the new version is ready quite quickly, but the corresponding news takes some time to be written. Develop new functionalities is a fun job, but writing a decent release blog is less.

The smart playlist concept has been in the development pipe for a while now. Nothing revolutionary in comparison to other softs, though: KooZic creates automatically a playlist based on one of the following supported modes: 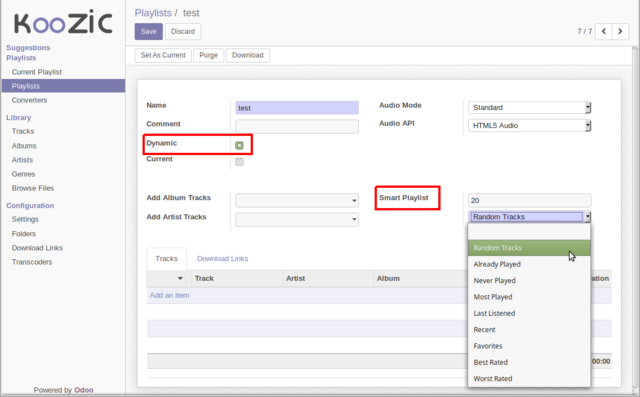 By default, a playlist is static, meaning that a defined number of tracks is added. It is also possible to define the playlist as dynamic. In this case, a track is automatically added while listening to the playlist.

Up to v1.0.0, each user had his/her own music library. From a technical point of view, that makes things way easier: each user has his own files, tracks, albums and artists. Moreover no mixing between collections, one won’t find in his jazz collection the tracks of his younger sister. However, if several users access the same library, it means that the same folder must be added for each of them. If a lot of users need this access, this can cause an (performance) issue since the database is filled with redundant data. 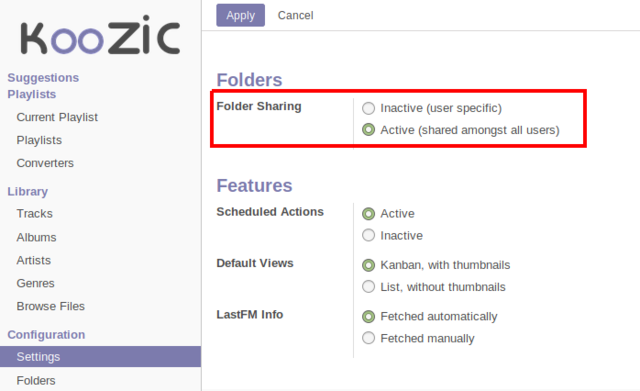 A new option is introduced in v1.1.0 in order to share the music collection among users. Watch out, it’s a all or nothing policy: either each user has his own collection, or all collections are shared. The data related to the playback counting, favorites, etc. remain specific for each user. Please note that there is no plan to make the access rights more fined-grained. This would quickly become overkill for a limited use.

The playlist options have been slightly reorganized for clarity. Moreover, the integrated album cover arts are now extracted if no ‘cover’, ‘front’ or ‘folder’ is available. In the folder view, it is now possible to add tracks recursively.

Another option has been added to ignore ID3 tags on a folder. This makes the folder analysis way faster for users who don’t use them. However, this also means that only the folder view will contain data. The tracks, albums, artists and genres views will remain empty.

Finally, the order of the transcoders is now taken into account during streaming. Up to v1.0.0, Opus was the default format, followed by Ogg and MP3. From now on, the default format will be the one with the highest priority. In case of doubt, do not touch anything ;-)