After a major UI refactoring in v2.0.0, KooZic is getting social and can now display upcoming events. Moreover, it is the first version to integrate LDAP authentication.

The major feature of this release is the addition of a social part to KooZic through the artists’ events. It is now possible to update the artist’s events from its form view, in the ‘Events’ tab. Moreover, each user can follow his preferred artists thanks to the ‘Follow’ switch, on the top right. 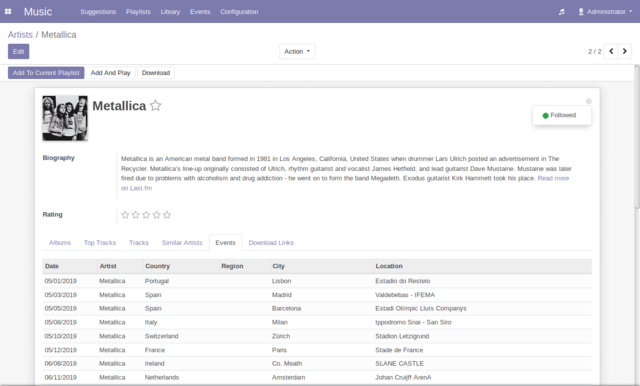 The events linked to a followed artist are aggregated in the top menu ‘Events’. By default they are grouped by month, which allows a quick overview.

Finally, it is also possible to define a maximum distance to display an event in the list. Each user can modify his settings (from the top right menu) and choose his location as well as the maximum distance allowed.

One of the major UI issue of KooZic is the number of clicks required to play a track. It first has to be added to a playlist, then play. It might be annoying, but up to now I hadn’t found a good technical solution. It is now the case, therefore ‘Add And Play’ buttons have been added in many places.

Such a button adds the tracks to the current playlist and starts playing.

It is not possible to integrate the KooZic users with a LDAP registry. To do so, it is necessary to install the appropriate module thanks to the ‘Apps’ menu: ‘Authentication via LDAP’

Then, you need to configure the server in the ‘Settings’, ‘Users & Companies > LDAP Servers’ menu. A configuration example is shown with a test server.

The video player Clappr has been updated, with a new subtitles management (support of SRT and WEBVTT files).