Support of the Subsonic API

The main feature of v0.3.0 is the support of the Subsonic API. Practically, it means that any third-party application compatible with a Subsonic server is compatible with KooZic out of the box! The efforts have been focused on the support of mobile applications, on both Android and iOS devices. The goal was to support as many features as possible, and so far we could achieve an excellent support for the main purpose of KooZic: music streaming ;-) Oh, and by the way: no license fees with KooZic!

In the future, video streaming might be supported. Regarding the other unsupported features, their usefulness is rather limited in 2017…

Here is a list of mobile applications, and their compatibility with KooZic.

Three applications were tested amongst the most popular ones. Their compatibility with KooZic is excellent, whatever your choice is.

On iOS, three applications were also tested. Once again, the compatibility with KooZic is very good.

This feature is available for testing on our demo server. To connect your app, use the following information:

A new menu gives a quicker access to musical genres organization. For a given genre, you can find the list of artists and albums related. 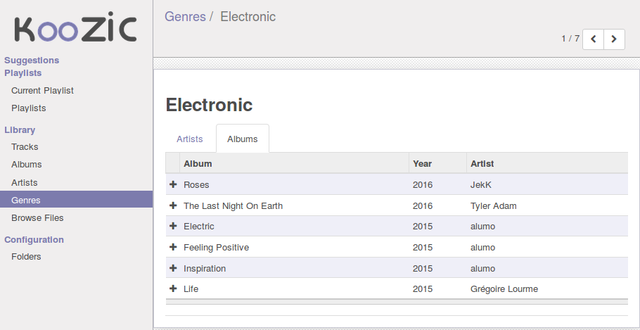 Aside from the Subsonic support, most of the development focused on performance improvements and maintainability. Image caching has been simplified and rationalized, while LastFM caching mechanism has been completely rewritten to make it much more flexible. However, nothing noticeable for the end user, except a few visual tweaks here and there.

When the upgrade process is over, start again your server and enjoy!