About a month after the release of v0.4.0, the v0.5.0 is already out! Well, ‘already out’ is maybe too much: there are few functional changes, but a major step forward for French translation.

Loading a new translation in KooZic is a piece of cake. However, you might have noticed that the interface is partially translated. This is due to the fact that Odoo, the software on which relies KooZic, is completely translated in many languages. However, the music extension is not. As of today, only the French translation is available. Other translations can be added collaboratively on the POEdit project. Aside from the translations, improvements have been introduced in track sorting.

To load a new translation, you must be connected as Administrator. Go to ‘Settings’, then ‘Load a Translation’.

The last step is to change the language in the user’s preferences. 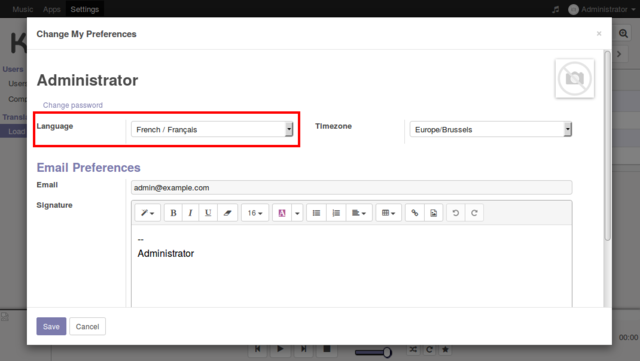 Contribute to the translation

As said previously, it is possible to contribute to the translation on the corresponding POEdit project. At the moment, only French, German, Italian and Spanish are available. If necessary, I will add other languages.

It is also suggested to use a version of the Python library Mutagen >= v1.33. Indeed, the previous versions suffer from a bug which incorrectly maps the performer to the album artist (the FLAC tracks are not impacted). Unfortunately, the default version in Ubuntu 16.04 is v1.22, which is affected by the bug. To upgrade:

When the upgrade process is over, start again your server and enjoy! To take advantage of the new track sorting, it is required to force a full scan on the existing folders. First, switch to the debug mode. Change the URL from:

In ‘Configuration > Folders’, click on ‘Force Full Scan’. Note that the scan duration will be slightly longer than the initial scan, since a complete update of the library takes more time than creating it.