… using Python 2! The last few months have been rather quiet regarding KooZic. The development didn’t stop, though. Several features have been added. Among others, the support of audio normalization, non-transcoding, and a converter.

When playing one track after another, it is sometimes possible to perceive a non-negligible volume difference. This can simply be explained knowing that each audio track has a defined volume level, which can be different from one file to another. Obviously, when listening to a complete album, this doesn’t happen since the volume level is coherent from one track to the other. On the other hand, when the tracks come from various sources, the volume level can vary significantly.

Many audio players feature the volume normalization thanks to the ReplayGain method. More recently, the broadcast industry has agreed on another normalization method, aka EBU R128 (European Broadcasting Union Recommendation R128). FFMpeg supports natively this method from 3.2.1. Nice, isn’t it?

From v0.8.0, it is possible to parametrize a playlist so that the normalization method is applied to all tracks. This functionality requires FFMpeg >= 3.2.1. Please note that a cross-distribution binary executable is now provided with KooZic. You can simply copy it to ‘/usr/local/bin’, and you should be good to go.

It is important to stress out that normalization is a resource-consuming process, and thus increases substantially the conversion time. It’s up to you to check if your server is capable of handling such an extra load.

The exact opposite option has also been introduced in this release. We can take advantage of our modern browsers’ audio playing capabilities to skip any pre-processing.

It is now possible to parametrize a playlist in order to completely avoid the use of FFMpeg, to simply read the file as it is stored on the server. This allows a major reduction of the server load, at the cost of an increase in the network traffic.

An audio converter tool, but for which purpose?

Long story short: because I needed one. An endless number of tools exist in order to convert an audio file from one format to another. Most of them are doing a great job. But, to my knowledge, none of them allows to easily import a playlist and convert it, while respecting the file/folder organization. KooZic can do it. 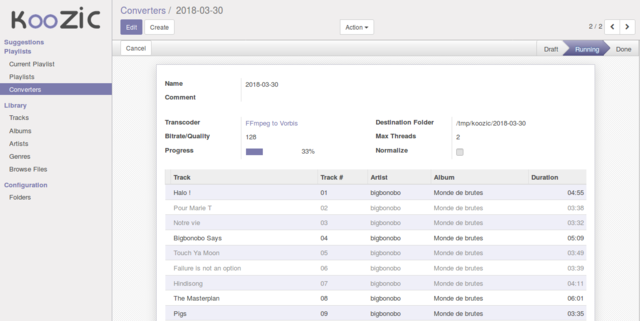 Similarly to playlists, one can easily create a list of file to convert. It is also possible to import an existing playlist. One chooses the conversion mode, the quality (bitrate), the output folder ('/tmp/koozic/’ by default), and press ‘Run’. The conversion starts asynchronously after less than 2 minutes. Nothing really sexy, one needs to realod the page to see the progression. But that does the job, and it is efficient.

Amongst the the more noticeable features, the pre-loading of the upcoming track is one of the most important. 30 seconds before the end of a track, KooZic preloads the next track. This allows to reduce significantly the gap between tracks, and to get a ‘almost gapless’ feature.

As announced at the beginning of this article, this is the last version using Python 2 (Odoo v10). The upcoming versions will use Python 3 (Odoo v11).